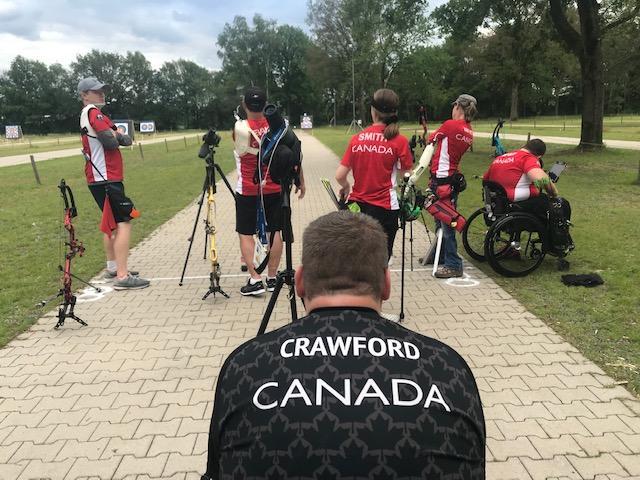 How to Coach in COVID

What does it take to get to the Tokyo Olympic and Paralympic Games this summer? A dedicated coach is a major part of it, and they have their work cut out for them. This year brings new challenges, like finding training facilities, coordinating quarantine periods, accessing local coaches, and planning strategic flight routes.

Since the modern Olympics began in 1896, it has only been cancelled a handful of times due to war. The coronavirus pandemic marks the first time that the Games have been temporarily postponed during peacetime. The Summer Olympics will run from July 23 to August 8, and the Summer Paralympics will begin August 24 and wrap up September 5.

Duncan Crawford, the head coach of the National Paralympic archery team, says he never thought he’d have to consider the logistics involved to compete during a pandemic. Because of everything it takes, he says that success is now measured differently.

“You go from that ultimate focus on performance and preparation to—success is going to be measured in ‘Can we get down there? Can we perform? What outcomes or objectives are we trying to achieve? Can we get everybody home safely?’ Touch wood, so far, we're in that situation,” he says.

In March, Crawford travelled to the Pan American Championships and Olympic/Paralympic Continental Qualifier in Monterrey, Mexico. On top of the extra planning, he also needed federal permission for the team to attend and compete on behalf of Canada.

Travel plans for the PanAm qualifier were complicated. The athletes, who came from across Canada, had to connect in Toronto, fly through Dallas, and eventually end up in Monterrey. His responsibility as a coach shifted from technical preparedness to “How do we move these people about the country safely?”

Strategic airline selection, transportation from the residence to the venue, and masking protocols were other concerns. “The whole game has changed. The level of anxiety around health and wellness basically takes over that excitement around performance,” said Crawford.

Travel itineraries aside, Crawford also worked collaboratively with regional, local, and personal coaches. Because athletes were largely unable to train together at in-person camps, they each had individualized training plans, a place to train, and access to coaching in their respective provinces. “We engaged local coaches a lot more than we would have in the past,” he says.

Mike Butler, National Head Coach of Badminton Canada, says that his athletes have already lived through international travel and restrictions multiple times. “By the time Tokyo comes, there will be lots of protocols for that as well. Our athletes will be prepared and they won't be shocked by the restrictions.”

They’ve travelled to world-ranking events in Denmark and Thailand, and to an Olympic qualifying event in Switzerland during COVID. So athletes can still train while they isolate, Butler says they found unique strategies upon return to Canada—like using an empty training facility.

Ultimately, he says he wants to distance athletes from the planning process. “We’re trying to keep that part away from them as much as possible and focus on the training. And so far, so good,” he says.

Since the pandemic has had a massive impact on training – and on the athletes who work so hard and for so long – getting to the Olympics will look and feel different this time around. And Crawford says that “being versatile and resilient and reminding yourself that the goal is the same,” will go a long way.