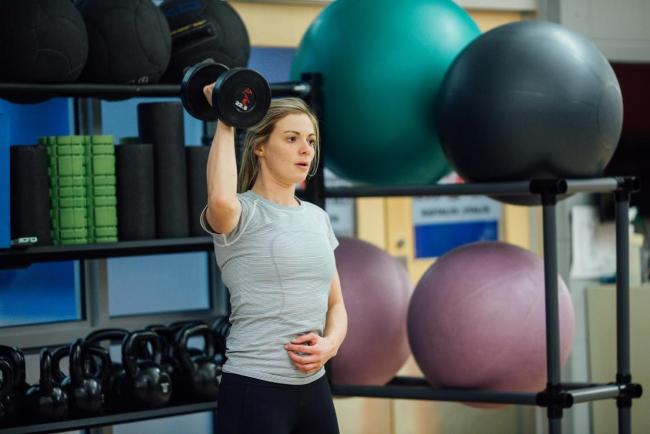 When the Canadian Paratriathlon team approached Kamylle Frenette in 2016, she never thought she would be eligible to compete. But today, the Tokyo hopeful is currently ranked fourth in the World Triathlon Para Rankings in the PTS5 category. In June, Frenette is set to race at a Paralympic qualifying event in Europe.

In her 2018 rookie season, Frenette won a paratriathlon World Cup, and finished second in the World Paratriathlon Series in Edmonton. She won another World Cup race in 2019 in Magog, Quebec. In fact, she’s ranked fourth or higher in the 13 national and international competitions she’s raced in. Despite this success, feelings of doubt lingered; she wasn’t sure if she belonged in para sport.

After her first race, she took a year off because she felt so uncomfortable. “It took me a while to accept, publicly, that I have a disability,” Frenette wrote in an article for CBC Sports.

Like many others, the pandemic year had provided ample time to dissect her life. “COVID just brings you to overthink the little things that are bothering you,” she says. “It’s always been on my mind that obviously my disability is very subtle, it doesn’t always show.”

The article, “Para sport welcomes me - but do I belong?” came from conversations with her sports psychologist, who suggested she write down her thoughts about growing up with her right foot slightly smaller than her left—a condition that she never considered a disability—and later competing at the World level.

Now that she’s full steam ahead, she’s enduring an intense training regimen which she balances with school. A typical day for Frenette usually starts once the clock strikes 5 a.m. It’s a whirlwind of training sessions (sometimes three per day), studying, and online classes. She’s a third year pharmacy student at Dalhousie University.

“It’s always been very important to not put all my eggs in one basket,” she says.   “I find I perform better if I have a couple things juggling, and just putting the pressure off myself and knowing that I have a bit more than just the one thing.”

Her Olympic training includes heat training, which is meant to simulate the conditions in Tokyo, a humid subtropical climate. “We went to Tokyo almost two years ago for the test event, and it is like, incredibly hot. More than I kind of anticipated,” she says. Usually, she would travel to warm destinations, like Hawaii, to train at heat camps. “But with COVID, we had to get a bit creative. So we’ve been doing it in a tent with a heater,” she says.

With the help of Canadian Sport Centre Atlantic, Triathlon Canada set up a tent in Halifax. Though heat training is quite common in the sports world, there wasn’t a facility in Halifax. Every few months, she does five-day intensive camps with all her workouts in the tent. “My coach, Craig, had a little spray bottle and kept spraying water so the humidity would go up,” she says. “That’s a big aspect too, because it’s just so much harder to breathe when it’s humid.”

With the Paralympic Games on the horizon, she’s embracing her place in para sport. Frenette is an inspiration for many who were touched by her article. “I heard from moms and parents of babies with clubfoot, which is the same thing that I have, who were like, ‘Oh my gosh, I’m so worried about my child, but I’m excited to read about this.’ Those messages were really great.”